Live and work in Cyprus 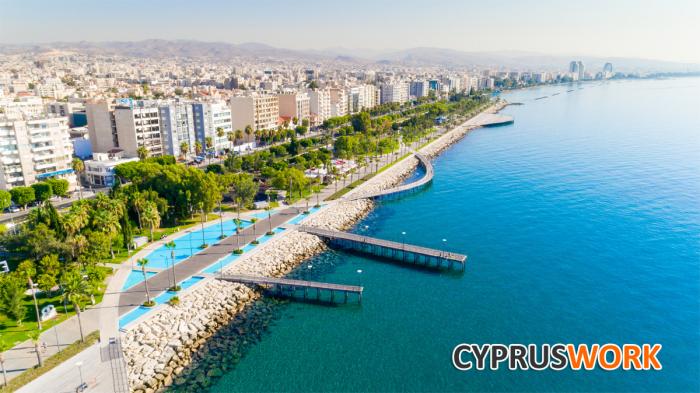 Moving abroad for work is a huge step to make but the idea of finding a job and moving to a sunny island with high quality of life can make it highly appealing. Cyprus is not only a sunny travel destination for Europeans, but it is also a finance and business center in the region that can offer plenty of work opportunities and work stability.

Cyprus has become the first choice for many multinational companies to establish their headquarters or open new offices. This, along with established Cypriot companies and the number of Cypriot startups constantly growing, has resulted in an increase in available job positions in a wide range of sectors. Industries that are flourishing right now are IT and technology, Forex, financial services, the tourism sector and the construction industry. The services and tourism sector currently account for more than 78% of the GDP of the country.

So, if you are looking into getting a job in Cyprus and moving there, here is some information on the island that you may find useful.

Cyprus is multilingual. The official languages are Greek and Turkish (Turkish is spoken in the northern part of the island, occupied by Turkey since 1974). However, English is widely spoken and used everywhere, and business is often conducted in English. English is spoken by nearly 95% of all residents. Russian language is also widely used since Cyprus is home to many Russian companies as well as Russians living in Cyprus. Forex and the services sector in general have jobs available for any language.

Although the minimum salary varies depending on the job, some jobs by law do have an official minimum salary. As of 2019 the official minimum salary is €870 monthly. However, jobs in most sectors have much higher salaries which can sometimes compete with the salary ranges in major European cities. Cyprus has some of the lowest income tax levels within Europe which makes relocation more appealing. The personal tax rates start at 20% for income over €19,500 and go up to 35% for income over €60,000. In addition, social insurance is payable by all employees. However, expatriates and foreigners can take advantage of tax deductions and benefits the administration is offering when moving to Cyprus.

The working days in Cyprus are usually 5 per week, from Monday to Friday, unless you are working in the hospitality sector or in shops which is 6 days per week. Office hours in the private sector are between 8:00-9:00 in the morning till 5:00-6:00 in the afternoon unless you are working at the public sector (thing unlikely for an expat). Working week is around 40 hours and the public holiday allowance is 21 to 25 days per year. Other benefits you can receive is medical insurance, pension contributions, annual bonus but those can vary from one employer to another.

Settling in Cyprus as an EU citizen

Cyprus, being a member of European Union, makes it easy for EU citizens to enter and work in the country. Paid employees, self-employed persons, students or persons with reasonable means to live without working can settle on the island just by obtaining a document required from the Civil Registry and Migration Department.

Nationals who are not citizens of an EU country, need a work permit as well as a visa before entering Cyprus. Your future employer must submit for a work permit before your arrival, and you must apply for a visa at the Civil Registry and Migration Department. You must provide your valid passport, your employment agreement, a medical examination certificate, a police certificate and a bank statement confirming your financial status so make sure you have all the necessary documents upfront.

After you landed a job and your visa application is on the way, accommodation is your next step. There are a lot of available houses and apartments to rent or buy in Cyprus. Prices can vary according to the area and city. Beach view properties are of course the most expensive followed by city centers. Most affordable housing can be found at urban areas. Limassol and Nicosia are the most expensive cities for renting or buying.

Cyprus offers public and private healthcare that is of high standard. All citizens who have their permanent residence in the Republic of Cyprus, are allowed free or low cost  treatment at the public hospitals or private doctors which are members of the newly established National Health System called ‘GESY’. Public hospitals and ‘GESY’ doctors can be found in all main cities on the island. A small contribution is deducted each month from all employees’ salaries for the ‘GESY’ services. Private healthcare is more expensive than public, but it is considered rather “cheap” when compared to other European countries. In many cases employers provide private medical insurance for their employees. Doctors in Cyprus are of high standard, as they are often trained overseas and most of them speak very good English.

Education in Cyprus is divided into the public and private sectors. Cypriots in general benefit from access to free education as provided by public schools. Public and private education are both of high standards, but lessons in public schools are conducted in Greek. On the other hand, primary language for most of the private schools is English. That’s why many expats prefer sending their kids to private schools.

Regarding higher education, again there are many options. Over the past few years many universities and colleges have opened across Cyprus with some being annexes of United Kingdom’s universities. Higher education in Cyprus is of high standard and already attracts a significant number of international students.

Cyprus is in the junction of three continents: Europe, Africa and Asia. With two airports (Larnaca, Paphos) and one main port (Limassol), transportation of people and goods is fast and efficient. Connections to all major European cities and Middle East are always available. Regarding local transportation, people in Cyprus usually find using their own cars for their daily commute easy and efficient. However, public transportation such as buses and taxis are also available, and people use them widely.

Cyprus is not just a summer destination but a European country with a high quality of life and full of opportunities. Distances are short which makes life easier and cheaper. Driving just a few minutes or two hours maximum depending on your location, you can enjoy either the blue flag beaches in the summer or the snow at Troodos mountains during winter. The mild weather makes the island enjoyable 365 days a year.

All over the island you can find shops, shopping malls and convenience stores. Cultural events like music concerts, theatre performances and art exhibitions are held regularly throughout the year.  Sports and outdoor activities are part of everyday life in Cyprus. Walking, running or cycling along the beach is usual for residents. Many sports teams choose Cyprus as their training destination.

Cypriots are known for their cuisine and love for food. You can enjoy your meal either in a traditional restaurant (Taverna) or at any international restaurant. The island is full of restaurants, bars and cafes most of them being of high quality.

Cyprus is ideal for everyone that not only seeks business opportunities but also high quality of life for them and their family. Whatever  the reason you are visiting the island, it will make you feel welcome anytime.

So, what are you waiting for?
You are just one step away from your dream.
Search for Cyprus jobs at CyprusWork.com